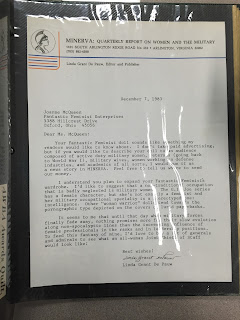 This is a letter from Linda Grant De Pauw, she talks about Fantastic Feminist doll propaganda with Joanne McQueen. Linda wants her to have a doll description to active duty military women. She also describes her worries about military women occupation development.

In last week’s class, we just talked about the new change about women in the military.  In 2013, the ban on women in combat was finally lifted, and in late 2015, all combat roles have opened to women. Linda’s letter wrote this letter in 1983, the United States spend more than 20 years and finally get it. The “women warrior” doll is not the pornographic type depicted on the covers of lurid paperback, instead, all women have opportunities to reach senior leadership roles in the military. I think it’s just a start to process to integrate women   fully into combat units. The ban has lifted, but the stereotyped perspective of females in the military cannot change immediately, just like Linda mentions in her letter, the evolution is slow, the influence of female professionals in the ranks and in leadership positions are increasing, but it still has a long way to go.