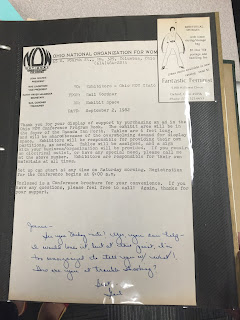 This is a letter from Gail Cordner, written on September 2, 1982 to exhibitors who were going to share merchandise at the annual meeting of the Ohio chapter of the National Organization for Women (NOW).  In the letter, she explains how to prepare materials for the NOW Conference Program.  To the letter she attached a picture of Joanne’s Fantastic Feminist doll and, on the attached card, the price of menstrual sponges, which Joanne sold, is included.  It seems as if everything is ready for the exhibitors.

Each year, the NOW exhibition includes dolls and other goods.  I think it is a good idea to have a feminist doll for every woman’s activity or organization.  Girls like dolls, and the doll is an attractive toy for many females.  In my researching of this topic for a recent paper, I mentioned the work of several organizations which work with children who have been sexually assaulted and their families.  We have a number of these organizations in our society, but most victims are not willing to join nor to open their hearts.  They choose to keep silent and heal by themselves.

Unfortunately, this is not always successful, and many suicides result.  If we create a doll for these children, I believe it is easier for them to accept psychological treatment and have new friends.  Children who have been sexually assaulted have less confidence to face other people.  If a doll could be their best friend, it would be helpful.  They could say anything to the doll.  It might even be possible to put a recorder inside the doll to record what the victim says.  Then, police officers could get the information from the doll, if not from the victim herself.  When I watched the movie Hope, the 8-year old girl’s best friend was her favorite cartoon character.  She did not have a real doll, but her dad bought her favorite character’s balloon for her, and her parents and neighbors rented the cartoon character’s clothes and played the cartoon for her.  It was the only way to make her smile.  Otherwise, she did not want to talk to anyone.

My inspiration comes from the movie, and from Gail Cordner’s letter.  Some people may question my idea, believing it is not right to steal the victim’s words from a doll.  However, I believe that it is the best way to prevent re-victimization of the children.