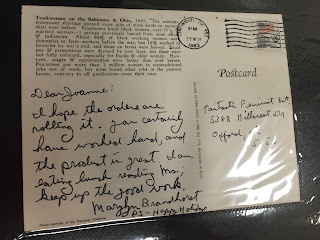 This postcard talks about black women work opportunities during around the 1940s, Joanne says the condition of black women workers was much better than before, the equal pay promotions were decreed by new laws.

1943 was the year of WW2, in my mind, before WW1, the black workers still had to face discrimination in employment, but during the war time, the industries need more workers to produce and support the military supplies. For example, based on a report of New York Times, the shipyard hired black women in production jobs, but before 1940, black women had been restricted to low level cafeteria and janitorial positions. In addition, black workers also protested racial restriction in 1944, they protested for their discrimination in promotion and got the support of many white people.

In the late 1940s, the government encouraged women to get into labor market and provided many job opportunities for them in order to fill the labor shortage. The difference of what the Joanne says in the card is, in the early 1940s, only some big industries hired black women, but in the later years, the government started to develop more jobs in different kinds of industries for the black women in the United States. For example, nurses, midwives, cleaners and clerical staff. Banking, textile and light industries, and also clerical, secretarial and assembly work. However, their wages were lower than male white and black workers. Joanne says, although the equal pay law was decreed, but they were not fully enforced. So, women started to struggle for equal pay in 1950s, and finally, the Equal Pay Act passed in 1970.