In 10th Anniversary Luncheon of Women in Film 1983, the film editor Margaret Booth, the actress Bette Davis, Ruth Gordon and Carmen Zapata attended as honor guests. Honestly, I don’t know anyone of them, but I heard Margaret Booth and Carmen Zapata in other classes. Carmen Zapata attended this Luncheon as The Norma Zarky Humanitarian Awardee. Carmen Zapata was an actress, producer, teacher, lecturer and narrator. She was also an activist of many rights activity, her first activity was about non discrimination employment, and she was also as honor guest attended the National Women’s History Museum celebrates Hispanic Heritage Month. She used her whole life to promote Hispanic writers and schools. In her late life, she has been a lecturer across the country, and continued to promote Hispanic American culture. The Anniversary Luncheon in 1983 was one of the culture promotion activities that she attended after she became a lecturer. 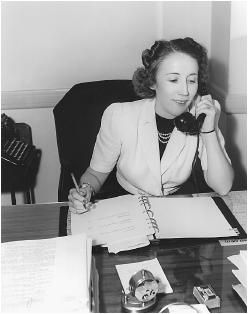 She could not get success without people like Margaret Booth’s contribution in Women in Film. She was an independent producer and a film editor. In 1983, she was awarded the Women in Film Crystal +Lucy Awards for outstanding women. When she was a producer, she helped a lot of female actresses to extend their roles and let them had a better development in American film industry.